For a few years now on Islay over a weekend in September , the Isle has been hosting a Jazz Festival , originally sponsored by Black Bottle , Lagavulin took over the reins a couple of years ago . We were on the Isle while the 2011 Jazz Festival was going on and managed to pick up one of the special bottlings . Iain McArthur selected a 1993 Bodega Sherry cask (No.355 , distilled 08/02/93 ) for the occasion  .

The colour of Autumn russet leaves , the initial nose is of dying embers in a fire , then peated sherry and finally peat smoke , it is a totally different nose to anything i’ve tried that Lagavulin have bottled . The palate is quite sweet at first , then the Lagavulin smoke emerges  . The sherry and the spirit are very well balanced , neither over-powering , it does actually remind me more of it’s easterly next door neighbour than a Lagavulin . The finish is medium , sweet and smoky . A very nice and unusual Laga – i can’t remember ever having a straight sherry matured Laga…..  apart from in Iains warehouse tasting  !

Both the Diageo Distilleries on Islay did a release that was only available over the counter at the distillery , both are Non-age statement (NAS) whiskies , Lagavulins was bottled in 2010 from the same spirit that goes into the Distillers Edition (Double matured in ex-Pedro Ximenez casks) but had been left to mature for extra years .

This one’s bottled at 52.5% abv and it’s all the better for the extra strength and extra time in the cask . Polished Amber in colour , the nose is a beautifully smoked sweet sherry , the sweetness seems to dominate after a time , loads of confectioners sugar but luckily the smoky sherry keeps fighting back . The Palate is a lovely mixture of smoke , sherry and peat , another silky smooth dram with a kick at the end. The finish is long , spicy , smoky and really chewy . A nicely balanced and complex malt , definitely better than the Distillers Edition !

When the concept of the original 6 “Classic Malts” was born it was decided to do a “Double Matured” version of each , effectively a version finished off in a different , unusual cask , Lagavulin was finished off in ex-Pedro Ximenez casks (a sweet sherry) . 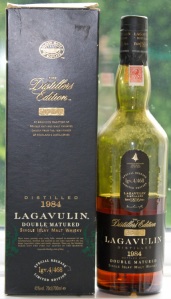 Another Lagavulin bottled at 43% abv , this one is the colour of Polished Amber . The nose is Sweet Sherry , bags of smoke , Confectioner Sugar , dried fruits and Christmas Cake , quite laid back in the glass . Dry on the palate at first , not the “Fire” of the 16yo , more relaxed with the sweet sherry , glides across the tongue beautifully . The finish is long , sweet sherry , smoke and iodine . Wouldn’t say it is my favourite Lagavulin  but a worthy dram .

Lagavulin is one of the most popular Islay Whiskies , many moons ago it was available as a 12yo standard but when Lagavulin became part of the “Classic Malts” it was upped to a 16yo , it is still available from time to time as a 12yo Cask strength Limited Edition release . 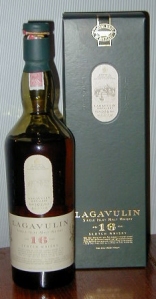 Bottled at 43% abv , this is a bright , orange marmalade in colour , the nose is really smoky to start with then the peat follows in and sherry . The palate is a burning peat fire , loads of smoke , peat and iodine . Really long with sweet Smoke on the finish . More of a smoke monster than the peat monsters that the South Shore is famous for . A cracking dram !

In Early 2009 Laphroaig changed their policy with the 10yo Cask Strength , gone was the standard abv and in came small batches with different abv’s for each batch…… 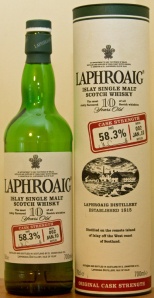 Batch 002 was bottled in January 2010 at 58.3% abv , almost Golden Syrup in colour , the nose is really (and i mean really ) medicinal , vegetal , quite farm yardy , sea shore , potent i think is the word and really nice ! The palate is…… pungent , like Laphroaig of old , medicinal , iodiney , peaty , sweet  and nettles……. Bloody hell that is good ! The finish is long , medicinal , peaty and creamy .

This is bloody good stuff , takes me back to the 80’s , a cracking dram ! I do own Batches 001 and 003 , they are un-opened but i have tried them in a bar and they do not disappoint ! Probably the best bang for bucks Laphroaigs on the market !

There was a time when there was a lot of discussion going on about Laphroaig not being as Strong (pungent) as it used to be , i was on the side of the “it isn’t”  , i first had Laphroaig back in 1984 and it was like nothing on this planet…… well maybe hospital antiseptic ! Even my wife had noticed it had lost something , when we were first going out in the early 90’s she knew from the other side of the bar i’d bought a Laphroaig , she didn’t like it . By 2006 she was drinking the stuff not knowing it was a Laphroaig ! This release started the come back in my eyes for Laphroaig…… 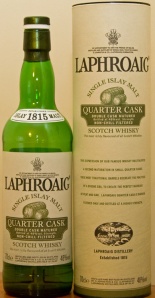 After spending some time in normal casks , this spirit is then moved into smaller “Quarter Casks” for further maturation before bottling at a higher abv of 48%  . Polished Gold in colour , the initial nose is very medicinal , seaweedy / iodine , damp moss and my old friend the nettle ! There’s a creaminess hiding in there as well , it does take a little while to open up . The palate is very vegetal , again there’s a sweetness to it , it’s actually quite short over the palate , luckily there’s a long , medicinal finish with Highland Toffee and you know what…..

A thoroughly enjoyable Laphroaig that re-ignited my interest in this distillery , as a well known game show host said “super,great,smashing” !

If like us you happen to miss Islay in between visits we start looking at other peoples accounts and blogs to see what’s happening on our favourite Isle , one that we regularly visit is Mark Unsworths Islaystudios’s Blog . Mark has some stunning photos of Islay on it and it usually makes us miss the place even more !

His Blog is at http://islaystudios.wordpress.com/ , well worth the Visit !

I was a bit wary of this one because i wasn’t a huge fan of the old 15yo which this one replaced , i actually got to try it when a former Laphroaig employee bought me one as a Birthday dram in September 2011 . When i got my FOL Birthday discount i bought a bottle with it…… 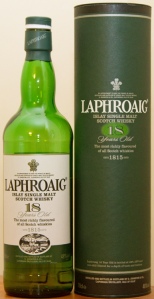 Bright gold in colour and bottled at 48% abv (to whom it may concern , can we have the 10yo at 48% as well please ?) , as with all Laphroaigs there’s a lovely oiliness in the glass ,   there’s more of an earthiness to this on the nose . relaxed peat , a farm yard with nettles (where the hell do i keep getting nettles from in Laphroaigs ?) and right at the end a whiff of iodine . The palate is wonderful , peat , iodine , heavily medicinal ,  the taste of the air after a storm on an Islay shoreline , a tremendous mouthfeel , boy is this good ! The finish is long , medicinal and fudgy sweet .

I think this is possibly my favourite Laphroaig , has everything you expect of Laphroaig , keeps giving after it’s gone and is so bloody satisfying !

This is perhaps the most famous Islay Single Malt Whisky , it certainly was the first one i ever saw back in 1984 . Famous for people either loving it of loathing it , i loved it when i first tried it , fell out with it later on when it seemed to lose something but have fallen back in love with it recently……. 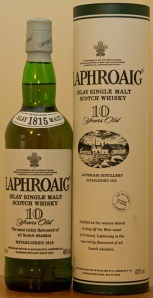 Bottled at 40% – i don’t know why they haven’t upped the abv in line with most of their competitors , would be nice to have it at 46% – and a bright gold colour in the glass , the nose is heavy on the medicinal , it’s a bit like standing on a rugged shore on the south of Islay , heavy sea air with sea weed , also there is a strong touch of farm yard and nettles , finally a smokiness appears . The palate is a heady peatiness with iodine , a nice sweetness to it , almost creamy fudge , silky smooth across the entire palate until the back of the throat when the peatiness and a brittle toffeeness bite in . The finish is long and medicinal .

Laphroaig 10yo back to it’s best , a really enjoyable dram…… if you like this kind of thing…..

Back in the annals of time i joined the Ardbeg Committee , i was just over the 1000th  member , late 2000 an envelope came through the door offering us the chance to buy a bottle only available to committee members . There was a choice of two bottles from single casks , both from 1976 both sherry butts . This being the good ol’ days we ‘posted’ ( for you computer geeks that’s when you put something in an envelope , sticking a stamp on it and posting it in a funny red pillar box) it , we now had to wait and see if we were lucky enough to get one and it usually took 30 days – i know , some of you would be suicidal by that time but that was half the fun , when we didn’t expect to get things yesterday ! 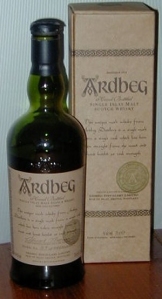 The choice of casks were from what was to become the legendary 239x series , I went for cask 2394 rather than 2392 , Distilled on the 24th November 1976 , it was bottled on the 18th July 2000 at 53.1% abv . A beautiful dark amber in colour , the nose is very fresh and open , sherry hits you first then the dried fruit – currants , sultanas ,cherries – a marzipan sweetness and a hint of peat smoke . There’s also a hint of smoky bacon and banana . The palate is very smooth , quite powerful as well , behind the initial sherry is the creamy coffee of so many other begs , there’s also humbugs ( minty ) and a peppery peatiness . The finish is just huge and long , again humbugs with pepper and a sweetness .

This is a colossus of an Ardbeg , a taster of good things to come , it doesn’t half bring back the memories of simpler times when getting a Committee bottling was great fun , oh for the Good old days !