This year we took our Holidays a bit later from our usual time , as it happened it was a blessing in disguise as if we’d took it at our normal time we probably would have had to cancel it as early in the summer Melanie broke her right humerus in 3 places ! We had to change our plans as she still wasn’t fit enough to do the planned walking so it ended up a lot more relaxing than usual !

We were returning to an area we got to know quite well last summer , Newton Dale or to be more precise Levisham Station , literally a stones throw (50yds ) from The North Yorkshire Moors Railway Station . Arriving on Early Friday Afternoon after a Lunch stop at the Fox and Rabbit in Lockton , our place of residence would be ‘The Rowntree Cottage’ at Grove House .

I have to say it is one of the best Cottages we’ve stayed in , Beautifully decorated , well equiped , spotless and in a wonderful location . There was a lovely welcoming pack includinf a very tasty Homemade Yorkshire Tea Cake . You will notice that a lot of the photos are of the Locomotives of the NYMR , this is partly due to the lack of wlking and the close proximity to the Station and the view out of the back of the cottage from the patio / shared garden at the back !

The View from the back of the Cottage

After watching the last of the early evening trains we settled down for a quiet evening , a few drinks and lisening to the local Tawny Owls calling each other…..

The next day (Saturday) we went for our first (of many) trips on the railway , up to Grosmont for a wander and Lunch in the Station Tavern .

It was back to the Cottage for a few beers and Wines…..

The Sunday was spent visiting Pickering , having a cracking Sunday Lunch in the Black Swan and then picking up supplies in the town , a few more trains were watched at Levisham…..

The Monday was spent on the Railway again with a trip to Whitby and back , there is no better way to spend a day than travelling just about the full length of the line , watching the world go by with a couple of beers along the way…….

Tuesday we were a bit more adventurous on our travels , we headed off to Yorkshires only Single Malt Distillery in Hunmanby , The Spirit of Yorkshire  .We got there just in time to do the Lunchtime Tour , It’s a bit of a strange distillery as the Brewing is done up at the Sister Brewery , The Wold Top , then is transported down to the Distillery for fermenting and distilling ! While we were on the tour we bumped into an old friend Joe Clark who is the Whisky Director at the Distillery . During the tour we tried the New Make (Extremely Fruity and Dangerously Drinkable) , At the end we got to try ‘The Work in Progress’  3 bottlings of blended spirit they’ve released , Blended by Joes fair hands , they will actually have whisky come next May when it reaches 3yo , They were all very good , 001 was my Favourite , 002 was Melanies (neither are available now ) but 003 still is . After having a bite to eat in their cafe , Joe treat us to a tasting of a cask or 3 , Most of the casks are stored up at the Brewery but they keep a few in the Distillery , the Bourbon barrel we tried was nice with a chocolatey overtone and the 2yo Oloroso and Fino casks were stunning !
They are doing a great job , they have an excellent New Make and are using outstanding wood .One to watch in the future ! 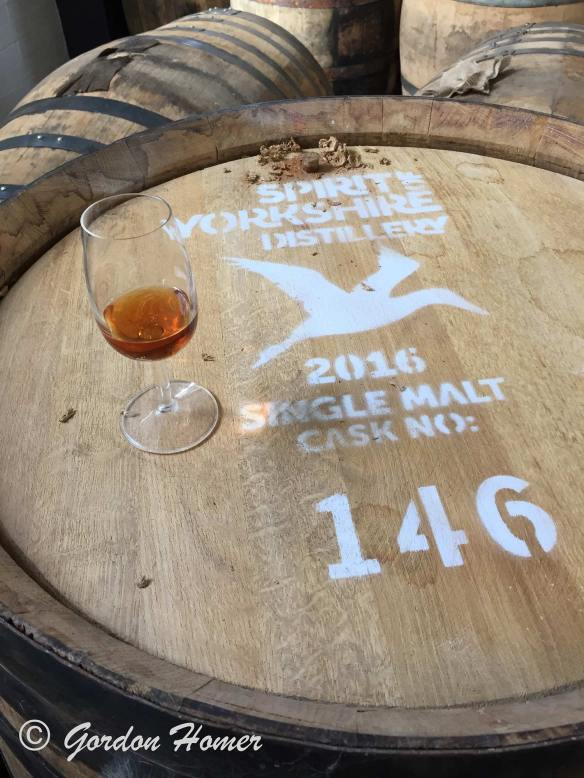 The Gannet is the Symbol of the Distillery due to the proximity of the RSPB Reserve at Bempton Cliffs and see we were close to it and members of the RSPB it would have been rude not to visit it !

Afterwards we went for a drive through Bridlington (don’t think i’ve been there before….) , it was nice day in the Yorkshire Wolds , bumping into an old friend and trying a nice whisky to be !

Wednesday was spent in Scarborough with Lunch in Ask looking over The Harbour , then it was across the road to The Harbour Bar for pudding , A Knickerbocker Glory !

Thursday was back on the train , this time to Goathland……..

Lunch was in ‘The Aidensfield Arms’ then it was a walk down the Rail Trail to Beck Hole and a visit to a pub we’ve been wanting to visit for a while , The Birch Hall Inn .

It’s a small but old pub , a bit like sitting in someones front room and the ‘bar’ is a serving hatch , it’s very popular and i can see why . It was also time for our tradition ‘Selfie on a Train’ , this one in a Classy 1930’s LNER Teak Coach .

Friday was a quiet day , apart from watching the trains , drinking on the sunny patio and getting a rather nice Lemon Drizzle cake off the cottage owners !

On the 2nd Saturday we had a drive up to Beck Hole to visit The Model Centre and a visit to Moorgates to watch the trains go by….. 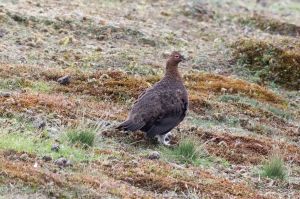 Not the famous one…..

On the Sunday we had a ‘Moorlanders Pullman’ Booked from Grosmont , so that was two return trips on the Railway (one can never do too many trips on the NYMR…..) So it was Levisham – Grosmont , Then Grosmont – Pickering Return on the Pullman and then Grosmont – Levisham ! Once again the Pullman Meal was superb , Melanie went for the Chicken Tikka Starter and i had the Salmon and Prawn Parcels , We both had the Topside of Beef mains and Melanie went for the Fruit Crumble for Pudding and i had the Lemon Meringue Pie . Always a beautiful way to spend a sunny Sunday Afternoon……

The Second Week was the quieter of the Two……

On the Monday Melanie took me out to Scarborough for my Birthday Meal , to ask again , then we had a lovely early evening drive back over the moors via Whitby .

Tuesday we just chilled out in the Cottage photographing trains , before heading off to The Buck Inn in Thornton le Dale for something to eat .

On the Wednesday we took one last train ride to Whitby , then headed up to our ‘Local’ (1 1/2 miles away) in Levisham Village , The Horseshoe Inn , for an Evening Meal . We tried to eat here last year but could never get in , we now know why , the food and service is fantastic !

For the penultimate day of the Holiday we drove up to Grosmont for one last visit and ended up having a sarnie in The Old School Coffee Shop , well worth a visit , lovely sarnies ! Also threw up some more photo opportunities …….

Later on we headed over to the Fox and Rabbit in Lockton for a bite to eat after packing up the suitcases ready for the early departure on Friday Morning .

Even though we didn’t quite have the Holiday we were originally planning we had a brilliant time in a beautiful place , the weather was pretty good over the two weeks apart from a couple of wet and windy days (we seem to get off lightly compared to the rest of the country) , The owners of the Cottage , Kay and David , are wonderful , they can’t do enough to make you feel so welcome . As i said earlier , it is one of the best Cottages we’ve stayed in , Beautifully decorated , well equiped , spotless and in a wonderful location . So good we are returning next summer , just a little bit earlier……